‘Eye of the Sea’ Ups the ante

The $5 million Autonomous Underwater Vehicle nupiri muka is poised to play a major role in important climate research at the remote Thwaites Glacier.

After a successful trial in Antarctic waters at the Sørsdal Glacier last year, the $5 million Autonomous Underwater Vehicle nupiri muka (‘eye of the sea’) is stepping up to a major role this year.

With massive new capabilities the AUV is positioned to become the lynchpin of major international research programs at the heart of climate change research at the remote Thwaites Glacier, sometimes known as the Doomsday Glacier because of its potential to accelerate sea level rise.

“The big change is that last year was the engineering trial and this time we are off to the main game in the sense that we are joining a Korean project which partners with a large international research program led by the USA and UK in this area,” said Associate Professor Guy Williams, Academic Lead of the University of Tasmania’s Autonomous Maritime Systems Laboratory.

“Last year, we operated from the Davis Station but this year we will be operating from the ship, which is a bit more dynamic,” he said.

“There are a few extra challenges but ship deployments allow you to get where the action is, you are right at the ice front when you are launching.

“It also enables us to go to a much bigger research hotspot, in this case the Thwaites Glacier in the Amundsen Sea area of West Antarctica, where there is a lot more active and integrated research. There are several important ice shelves in this region and Thwaites and greater potential for the AUV to conduct longer runs underneath the ice.”

Mr King said since last year the AUV’s battery capacity had been doubled. “So we can stay in the water nearly twice as long as we could prior,” he said.

It means we can run more instruments, we can run twice as far – basically it is a massive capability boost - Australian Maritime College AUV facility manager Peter King

Mr King said the first at-sea trials of the locally built launch and recovery system (LAR) had been successfully conducted from the Ocean Dynasty off the south-east coast of Tasmania in October.

Associate Professor Williams said the team was building towards the AUV’s full capability of travelling up to 100km under the ice shelf and back.

The AUV would help research teams address data gaps in relation to the rate of melting of ice shelves.

“The main uncertainty  is that we don’t know much of the geometry of the cavities underneath the ice shelves, which makes it difficult to accurately model the ocean circulation  that is causing  the melting,” he said.

He said key data was being sought from the AUV to map map both the sea floor and thickness of the ice above.

“With improved cavity geometry, the ocean modellers can do a better  job of determining how much heat is getting under and how much melting is occurring,”  he said.

Associate Professor Williams said the enormity of the task meant an international effort was required.

“It takes more than one  country to study an ice shelf and the problem involves observations of the surface of the ice, the ocean, the atmosphere with many different instruments deployed in an integrated way,” he said.

“So there will be different icebreakers visiting over  the next few years and instruments left out on the  ice during the year.”

The AUV is scheduled to leave New Zealand bound for Antarctica at the end of December.

After a two-week voyage on the Korean icebreaker, the AUV will be deployed as often as possible with an expected return in late February 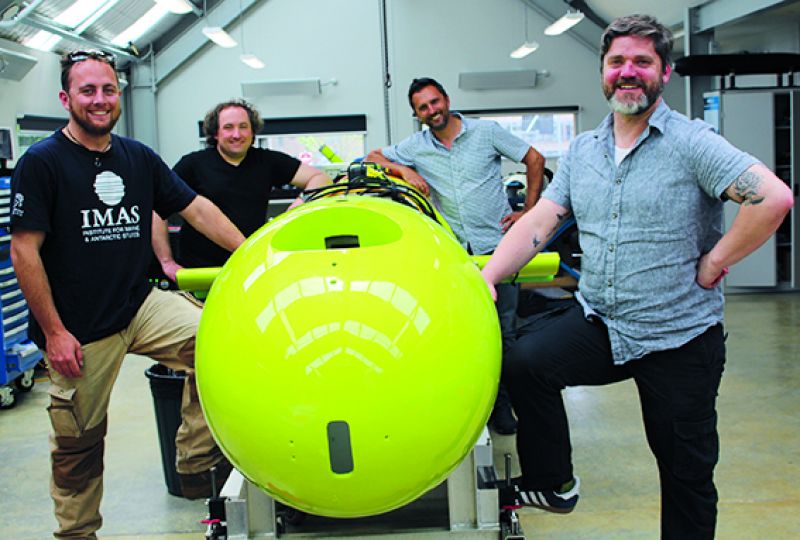