The University of Tasmania’s state-of-the-art Autonomous Underwater Vehicle (AUV) nupiri muka is helping to unlock the secrets of the Sørsdal ice shelf, near Australia’s Davis research station in East Antarctica.

The first published results from the AUV’s voyage to the ice shelf in early 2019 suggest that cold and saline water beneath the ice controls the weak melting observed from surface sensors.

However, the research team, which included researchers from Institute for Marine and Antarctic Studies (IMAS), the Australian Maritime College (AMC), ACE CRC and the Australian Antarctic Division, also discovered a 1,200-metre deep seafloor trough running under the Sørsdal, which could allow warm water to enter and increase the rate of future melting if ocean conditions change.

The lead author of the paper in the journal JGR Oceans, Dr David Gwyther, said ice shelves such as the Sørsdal are floating extensions of Antarctic glaciers and play a key role in retarding the flow of the ice sheet toward the ocean.

“nupiri muka is one of the few AUVs in the world capable of operating autonomously under the ice, and our results show the value of this capability,” Dr Gwyther said.

“Last year’s deployment was the first time a vehicle of this type has explored beneath the Sørsdal ice shelf.

“When combined with data from a range of more traditional sampling methods, our results have allowed us to build a more complete picture of the processes controlling melting of the ice shelf.

“Although previous studies have documented the presence of a reservoir of ocean heat less than 50 kilometres from the Sørsdal, we found that cold and salty water may be blocking the warm water from reaching it, maintaining relatively weak rates of melting.

“The deep trough that we identified is a potential pathway for warm water that could see the Sørsdal melt more quickly if ocean processes in the region change,” he said.

Dr Gwyther said melting of the ice shelves threatens their role as a buttress that blocks the progress of ice sheets draining from the Antarctic.

“Ocean-driven melting at the base of ice shelves is already the main contributor to mass loss from the Antarctic ice sheet.

“A reduction in the buttressing effect of ice shelves is a negative feedback that can lead to glacial acceleration and a further increase in their contribution to mean sea level.

“It is therefore vital that scientists continue to monitor and better understand the changes taking place underneath the Antarctic ice.

“The unique access and data collection capability provided by AUVs means they can play a key role in this global research effort, which we are contributing to in collaboration with our local and international colleagues,” Dr Gwyther said.

In February this year nupiri muka completed a 60-kilometre round-trip beneath the sea ice adjacent to the Thwaites Glacier as part of a Korean voyage in the Amundsen Sea region of West Antarctica.

The AUV and the two glacier expeditions were funded by the Australian Research Council through the Antarctic Gateway Partnership. The AUV is housed and maintained at the AMC in Launceston. 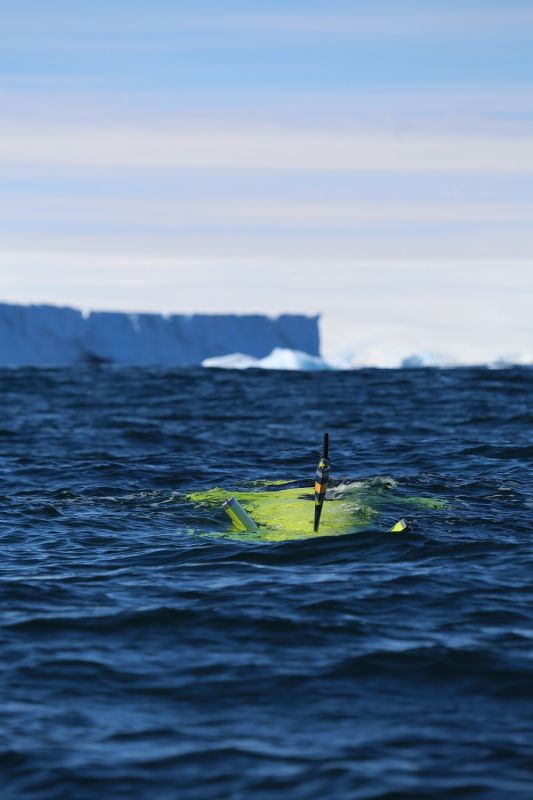