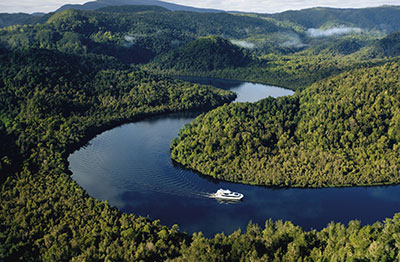 All ships and boats generate a pattern of waves when they move, and the characteristics of these waves alter significantly with changes in vessel speed, hull shape and/or water depth.

The Australian Maritime College (AMC) has been proactively researching boat-generated waves and the effects they can have on surrounding shorelines, maritime structures and other users of the waterways since the mid-1980s.

Key to this research effort has been the development of an empirical tool that can accurately predict the characteristics of the waves generated by any vessel and rational methods to assess their potential impact on any specific waterway. These tasks are important during design and planning stages to avoid issues from vessel wave wake.

Development of the Wave Wake Predictor

The Wave Wake Predictor is an empirical prediction tool that was first developed between 1996 and 2000 from an extensive series of physical scale model experiments within a deep and wide test basin on more than 80 different hull form configurations conducted (involving over 6000 individual wave cuts). This early version of the tool focussed purely on deep water conditions (sub-critical depth Froude numbers). In 2000, a wide basin that was ideally suited to investigate the effects from shallow water operation was commissioned at AMC. This controlled environment hydrodynamic facility led to an even more ambitious experimental campaign (involving a further ~8,000 wave cuts), plus a more considered approach to the analysis of vessel generated waves wake: something that was essential when considering waves generated by vessels over the full range of practical speed/depth zones (sub-critical, trans-critical and super-critical depth Froude numbers).

By 2012 the ‘next-generation’ Wave Wake Predictor had been developed and successfully validated against the full scale trials data for over six different vessels. Since then, the Wave Wake Predictor has been continually developed to further expand its capabilities in terms of (a) the range of applicable vessel types and sizes (including ‘extremes’ such as wake boats for wakesurfing and other water recreational craft), and (b) estimating the effect that other relevant factors have on the characteristics of the waves generated, such as (but not limited to): the effect when a vessel accelerates or decelerates; the effect of narrow river or shipping channels (lateral banks); the effect of varying bathymetry; and the effect of a manoeuvring (turning) vessel.

The empirical tool has been further validated against full scale trials data for over 25 different vessels, covering a large range of different vessels, operating over a wide range of vessel speeds and water depths. These vessels include recreational craft (including typical aluminium runabouts, wake boats, ski boats, jet skis, etc) and commercial vessels (including approximately 10 passenger ferries ranging from 20 to 40 m length overall, and other commercial craft).

The output from the Wave Wake Predictor includes the characteristics of the most significant waves within the vessel generated wave train. For several decades it has been common to perform just a basic assessment of the impact of a vessel’s wave wake, where the characteristics of just a single wave within the entire wave train is considered (usually the highest, regardless of its wavelength). However, Macfarlane (2012) has shown that this overly simplistic approach is inadequate when considering craft operating in shallow water, which is very common for vessels operating in sheltered waterways. As a result, it is highly recommended that the waves with (i) the greatest height, (ii) the longest period, and (iii) the greatest energy should be identified and considered in any assessment. In some circumstances it is possible for one single wave to possess all three of these attributes however this is very rare for vessels operating in shallow water. To ensure that all potentially damaging waves are identified and considered in any assessment the following three key waves were defined and became the focus of the Wave Wake Predictor:

Use of the Wave Wake Predictor

We regularly provide expert advice in the field of vessel wave wake, ranging from general enquiries through to comprehensive independent environmental impact assessments.

For access to use the online version of the Wave Wake Predictor or to enquire about other services offered in this field, please contact us at the details provided below: