The violence, chaos and beauty of cavitation 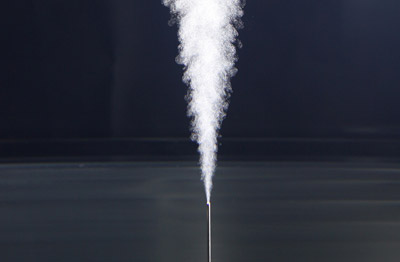 Experimental group studying fluid mechanics and naval hydrodynamics in a bid to reduce noise generated by ships and submarines.

When fluid flows around an object at high speed, like water around a ship's propeller, it may form bubbles like water boiling. This phenomenon is called cavitation.

Instead of temperature increase causing the water to boil, a reduction in pressure causes the bubbling in cavitation. The process is violent and chaotic as bubbles form and collapse with enough power to erode metal. It also creates a lot of noise, which is a serious problem for vessels that require low noise levels for their survival.

"Cavitation is of particular interest in ship and submarine hydrodynamics as it causes a range of problems for propulsion and control equipment including unpredictable flows, thrust breakdown, unsteady loads, vibration, noise and metal erosion," Associate Professor Brandner said.

"Understanding cavitation is therefore vital in reducing the noise generated by ships and submarines, and important for avoiding detection or reducing environmental noise pollution. Cavitation may also significantly reduce operability and ultimate life of equipment due to its destructive nature."

The $10 million CRL was developed under the Commonwealth Government's AusIndustry Major National Research Facilities Program through collaboration between AMC, the University of Tasmania and the Australian Defence Science and Technology Group (DSTG).

It features a suite of modern world-class facilities including a variable pressure water tunnel, or cavitation tunnel, used for experimental modelling of the basic physics of hydrodynamic cavitation.

Research is largely focused around Australia's future submarine program funded through DSTG, as well as related studies funded through the Australian Research Council and the United States Office of Naval Research totalling over $4 million since the facility was commissioned in 2011.

"Our facilities are some of the most advanced internationally for their size and the type of work that we are doing. A major part of our research program is studying the start or inception of cavitation which is dependent on tiny, micron-sized bubbles present in all practical flows," Associate Professor Brandner said.

"Many of the physical processes involved with cavitation are common with bubbly flows generally, which are also studied in the CRL. Our tunnel has the unique capability that it can be artificially seeded with bubbles ranging from micron sizes through to tens of millimetres to create a range of flows of interest."

The knowledge uncovered by Associate Professor Brandner and his team is used by modelling experts to develop computational tools to predict fluid flow as accurately as possible.

What drives him is the sheer enjoyment of his work.

"Cavitation is captivating. It is beautiful and interesting. It is also chaotic. There is so much we don't understand, and every time you think you've solved a problem, there is something new."

The cavitation tunnel is 35 metres long and 10 metres high. It can hold 365 tonnes of water and has a maximum flow rate of 4.5 tonnes per second.

Cavitation is all around us

Although rarely seen, cavitation is actually very common and applications for understanding the phenomenon are broad.

The snapping shrimp and mantis shrimp use cavitation to capture their prey, and cavitation can occur in trees when they draw groundwater up through specialised tubes called xylem.

It can also be found in the medical field, where ultrasound is used to create localised cavitation for non-invasive diagnostics, surgery and drug delivery.